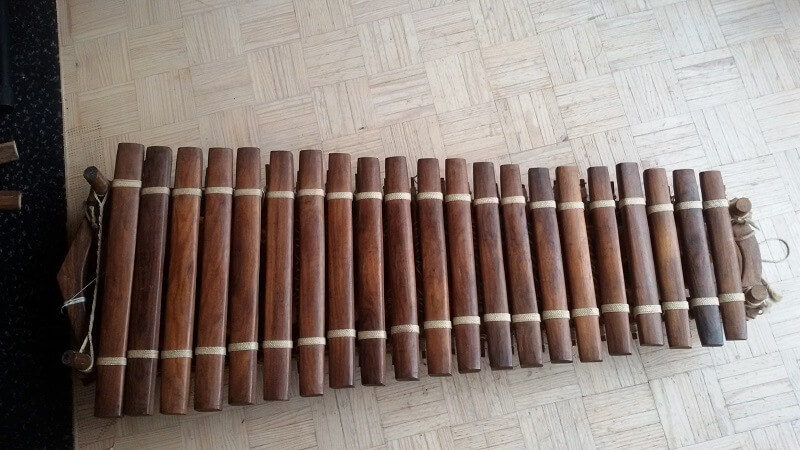 Posted at 16:05h in Repair & Maintenance by Paul Nas 0 Comments

I checked her Guinean balafon for Monique Derksen. She bought it at the time through Arafan Touré . Arafan Touré lived in the Netherlands for a long time and has made beautiful arrangements, some of which are included within the WAP pages, but there is also a beautiful book with CDs featuring more arrangements, his history and work. (It seems this book is still available). It is a wonderful instrument! It is a so-called equi-heptatonic balafon. In this tuning, the octave is divided into 7 equal parts. So the tones do not come out to the tones we use a lot in Western music. It means you can start any melody at any place on the balafon without affecting the course of the melody. Similar to the equi-heptatonic balafon, there is also the equi pentatonic balafon. Here, two sound bars have been removed from the equi heptatonic scale.

The sound bars still sounded fine and well matched. Each seventh sound bar sounded an octave higher. They ‘re also tied reasonably well on the frame. In consultation with Monique I left this part untouched . 4 gourds failed. Of the other gourds, a number no longer matched the parent sound bar. Also, some of the membranes covering the holes in the gourds were gone or torn. The intended buzzing effect is then lost and the resonance no longer works between the sound bar and the calabash.

The gourds loosened, washed and empty scraped, dried and provided with new membranes. Also applied new strands and then I could tie the calabashes in their correct place. Now the balafon has been restored to good condition. I do not play the heptatonic balafon myself, but only the pentatonic. With lessons on this instrument I can unfortunately not help Monique …. Who does? 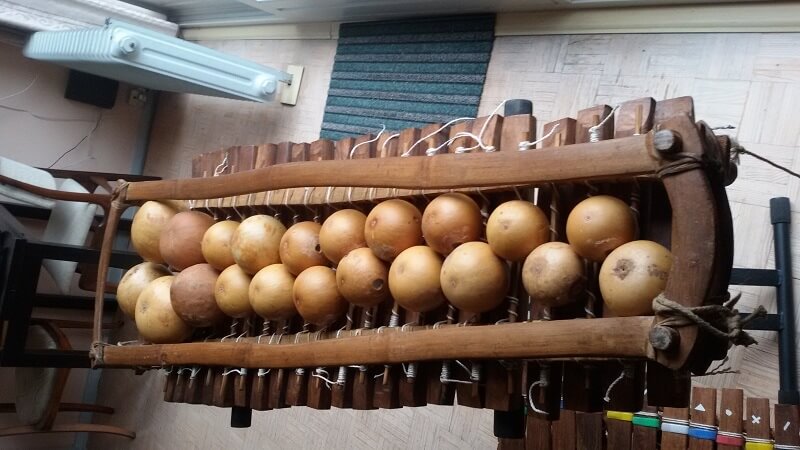