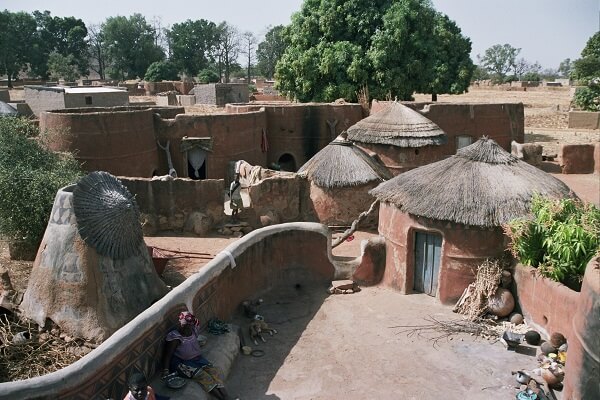 12 Feb Building a hut in Ouezindougou

Posted at 15:55h in General by Paul Nas 0 Comments

Building a hut in Ouezindougou for the project Buggenum (NL) – Ouezindougou (BF): In 2006 a festival site was created in Ouezindougou with a few traditional huts. In this video you can see how it was built. Traditional huts were built from different tribes in the country. The aim was to create a kind of open-air museum that could become a tourist attraction along the Ouagadougou – Bobo Dioulasso route; the main road in the country. During the festival, to be held a few months later, guests were housed in the huts grouped around the festival. About 10 huts were built, but also a shower house and the community house, both of which were reinforced with cement. The huts were made in the traditional way with clay, sand, water and stones baked by the sun. You can see a little more of the village and its inhabitants in a self-made film report of the ‘Tour de Ouezindougou’. and De Zongofamilie ‘Tour de Ouezindougou’. and De Zongofamilie

Once more the huts were renovated a few years later for a second festival. However, the rainy season in Burkina takes its toll and the huts built of sand and loam are vulnerable to rain showers. Year after year, the houses fell back into the sand from which they were made. But this movie ‘Hutje Bouwen’ (Building a hut in Ouezindougou) has remained and I like to place it as a reminder of the project and the festival in Ouezindougou.