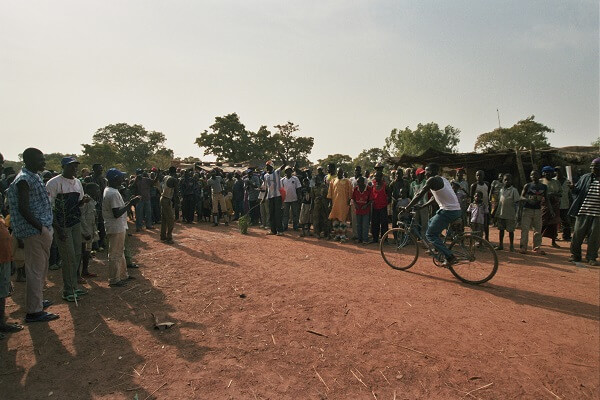 Posted at 15:39h in General by Paul Nas 0 Comments

It has been a few years since I organized the Tour de Ouezindougou in Burkina to support a specific project in the village of Ouezindougo. that’s close to Sabou, on the road between Ouagadougou and Bobo Dioulasso. It was in the aftermath of the Buggenum (NL) – Ouezindougou (BF) project when I visited the village with Jan Wilms. Wells had been dug, the village school had been expanded, there had been a festival. There was also a community center, a photo exhibition and a garden project in which the fencing of the gardens was financed.

During our visit we exchanged some gifts and we were allowed to hand out cycling clothing that was made available by the bicycle shop of Buggenum. I planned to organize a bicycle tour in the village. It became known to me that the cycling race ‘Tour de Faso’ was regularly held in Burkina Faso. It was fun organizing a local tour and handing out cycling clothes as prizes.

There appeared to be enthusiasm for this idea and a trail was set out on the parallel road along the main road from Ouagadougo to Bobo Dioulasso. As a reporter, I took a seat backwards on a moped to make a film report. Not harmless but without (my) unscathed …. See this little impression of the Tour de Ouezindougou!