Posted at 08:03h in General by Paul Nas 0 Comments

In recent years, during my various study trips to Burkina, I have visited Youssouf Keita’s workshop a number of times. He’s my balafon teacher in Bobo Dioulasso. Now I have set up a crowdfunding for the purchase of land for a new workshop.

The first times I was amazed that his rented site was sparsely furnished. Apart from a boiler room and a small storage room, little had been built on the site. All material was outside and the whole gave a messy impression. There was also not a single tree. Trees are just as important for shade and a bit of coolness in the dry (and very hot) season. Later I understood from Youssouf that the lease of that land could easily be canceled. He also feared that such a cancellation could well come because land prices had risen considerably. 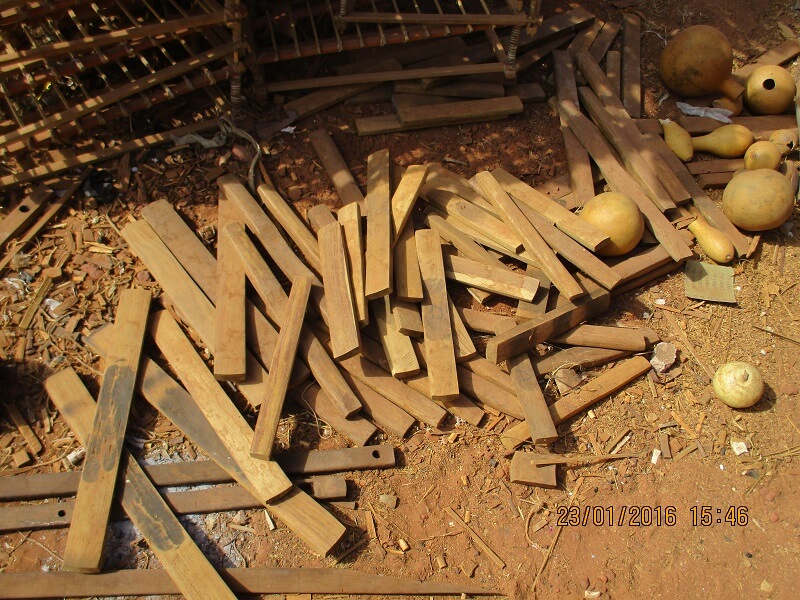 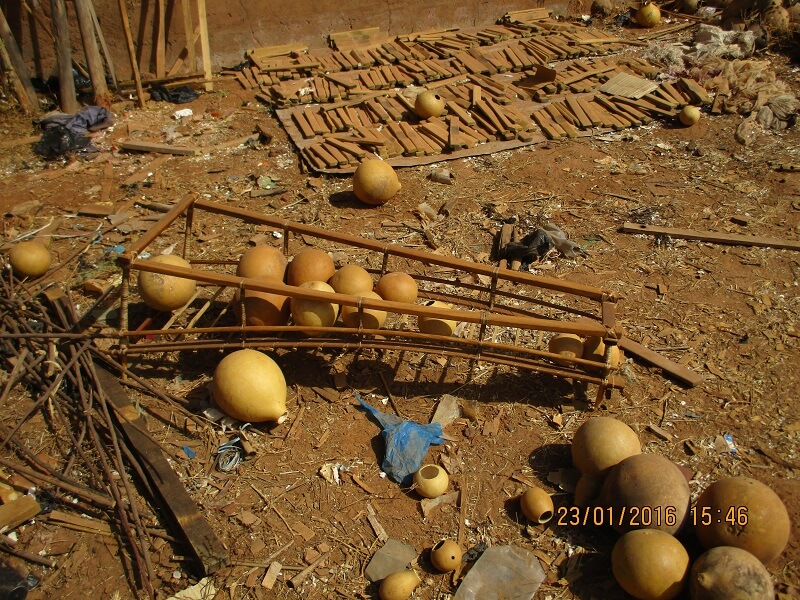 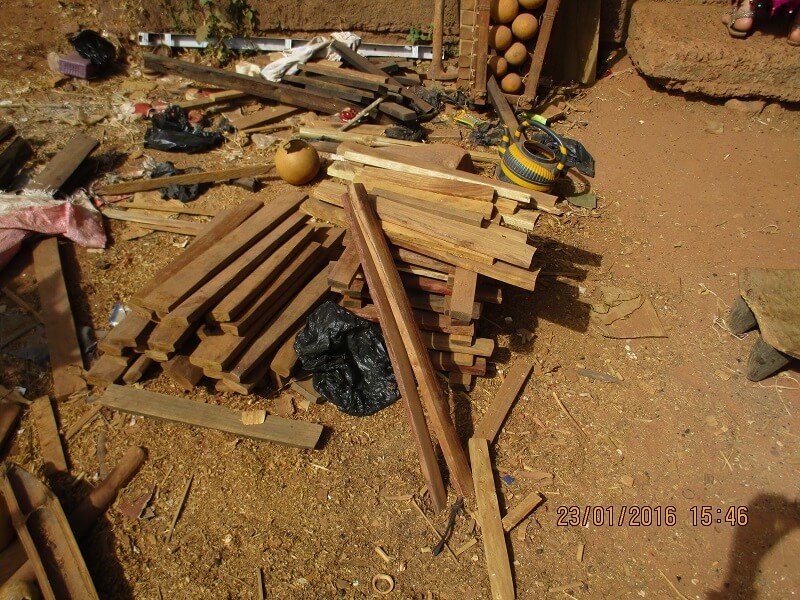 An image of the old workplace

Still, of course, the cancellation came at a very inconvenient time. Moreover, Youssouf, with the care for his own children and household in Bobo, also has partial care for his wife with household in Sikasso. In addition, Youssouf has a few people with fewer opportunities to make ends meet independently. Like Yaya and Junior, they are helpers who live with him more or less permanently. And like Hakiri his friend who became one-sided paralyzed after a cerebral infarction and can no longer play or weave balafon. With those things Hakiri was able to contribute to the household money for his wife and six children.

At the beginning of September he received an offer to buy a piece of land at a relatively low price. It is located on the outskirts of Bobo, where a new expansion area is being realized. When territory is added to a city, it is initially allocated by the traditional ‘Chef’s du Terre’, the mayor of the land ‘in consultation with the local owners of those lands. In Kiri, as the new district is called, Youssouf had been allocated a piece of land of which he had now received the first purchase right. To assert this right, he had to pay € 1100 transfer tax to the state in the short term. That is in addition to the € 800 required for the purchase of the land. It was an opportunity, but without money Youssouf was unable to make those payments. For the purchase itself, he might be able to pay the money in installments, but the tax had to be transferred within two weeks. Youssouf appealed to me and through me to friends in the Netherlands. With some money and a loan he could be helped.

I decided to take action and set up a small crowdfunding. I approached ex-Burkina goers and students and our family and friends to contribute to this crowdfunding. The response was very positive and now even the € 1900, = is made!  In addition, Winnie (student and fellow traveler from the last Workshop in Bobo) ordered a balafon from Youssouf and he had some normal earnings with that. Yet another student is seriously considering ordering a balafon. In any case, I decided to transfer the total amount of € 1900, = as a gift. Youssouf can now start working on his new site and now has a permanent basis for his workshop. His family will also move to this new piece of land in due course.

Thanks Dirk for finishing the crowdfunding with your contribution! 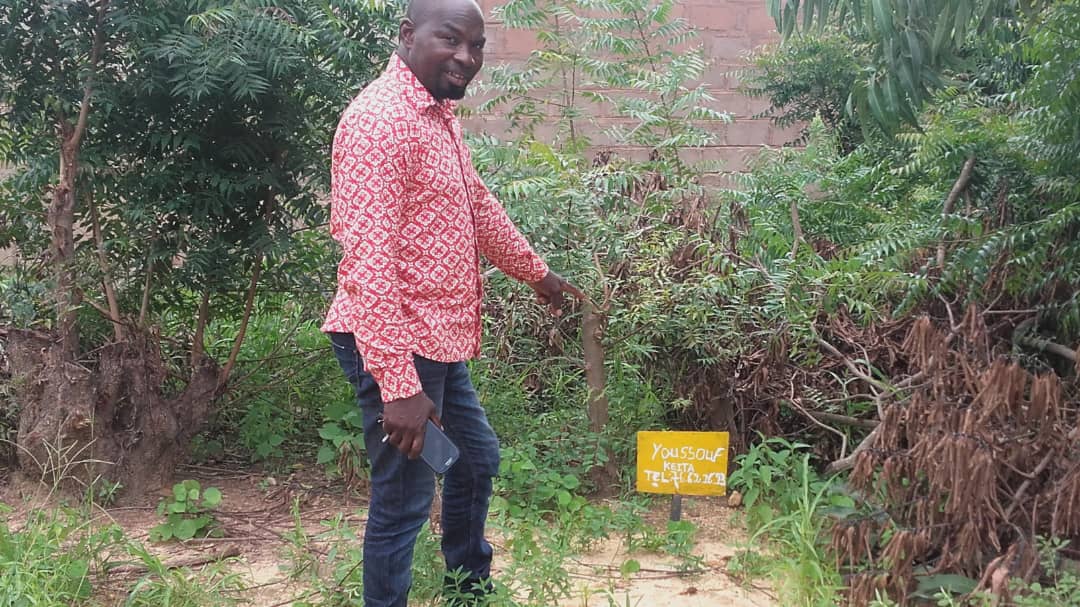 Hi Paul,
THANK YOU for your response that brought tears to my eyes, and also for all the good news I received through your message. I’m really excited about everything you’ve written, and it gives me even more courage and a lot of HOPE in life. THANK YOU Paul for your sincere friendship.
Kiri is not far from Bobo, about 6 to 8 km, and I want to buy the land to build a house for me and my family, including a workshop. I had many insecurities about my future, despite the hard work. But Paul, your good news, has just awakened a HOPE in me. I also wish all the luck to you and the whole family.
Winnie just messaged me to help me buy my land by buying one of the stage balafons. I ask € 500 for it, which includes the shipping costs and the cover that I have made with it. All this help is thanks to you.
Hakiri and his family are doing very well. He comes to me twice a week.
Paul, I sincerely and infinitely thank you for everything you do for us. Long live you and all who contributed.
Many greetings to you, Karin and all friends from the Netherlands.  🙏🙏🙏