Posted at 12:38h in General by Paul Nas 0 Comments

As Youssouf was coming to the Netherlands  I had already planned a Balafonmeeting when he would be there. His brother Aly Keita , who lives in Berlin, wanted to visit his brother in Tilburg and chose to join the Balafonmeeting. Of course, for my students and myself, this was a super opportunity to have a joint workshop during the Aly & Youssouf Keita meeting on 19 June 2022. We could go to the chapel of the ‘Hooge Veer, a meeting space for the residents of the complex there, a beautiful location and very practical: right around the corner from my home!

I had prepared with Aly and Youssouf that they would introduce the group to a few special rhythms and playing styles. During such a Balafon meeting, there are both beginners and very experienced players so something new is then the same for everyone and again a bit of searching…. The workshop also offered plenty for (somewhat experienced) N’Goni players to join in and learn. There were also some percussionists signed up, who wonderfully supported the workshop with douns, shakers and djembé!

We worked on Nji Namou, a 9/8 song created by Youssouf himself, which was inspired by Koredouga (a commonly used Malian rhythm). Two short patterns divided into two groups were tricky to bring together and a melody.

As our second piece, we worked on Dondory, a piece of music Aly included on his first album ‘Akwaba Iniséne‘. The piece was written to accompany the ancient saga known to the Bwaba about the origin of the balafon. There are several versions of it in circulation, but they always involve a hunter who one day cannot bring in hunting bounty, a forest spirit and an old dead tree against which a nap is taken. Youssouf told the whole story to it which is now included on the accompanying balafon rhythms.

As a third exercise, we played (Mi Who) Yi Be We but with a different harmony. The balafon players in Africa are used to playing a piece of music in different places on the balafon. In doing so, the hand-eye coordination remains the same but the melody of the song changes. Sometimes confusing, but a nice exercise to get a good feel for the motor skills you are playing and shift everything in parallel to the left or right. The most obvious shift then is to the minor or major variation of the rhythm. The pentatonic sequence actually works well for two keys; a major key and a minor key. For example, the balafon we use for our lessons has the major key of C# major. In addition, it can also be used for the key of A#minor. If a song is learned in one, you can transpose it to the other.

An impression of the workshop

After the Aly & Youssouf Keita meeting, we left for my house to afterparty. Everyone had brought something to eat and/or drink and Aly had made his famous peanut sauce with Youssouf. He really likes to cook himself!

Unexpectedly (well… not really…), Youssouf and & Aly gave another concert in my living room! Beautiful well-known and unknown pieces were played beautiful. The two brothers visibly enjoyed it themselves; it had been 20 years since they had actually performed together (apart from a workshop in Konsankuy where they worked together but did not perform. 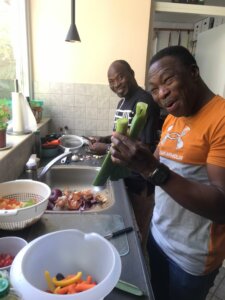 Impression of the concert by Youssouf & Aly Keita