AAwa Dabolé is a rhythm with beautiful Bambara / Djoula song that I heard during a hunting party in Kolina in Mali. It was sung by Oumou Mariko and on balafon accompanied by Lamin ‘Balani’. From him I learned to play the rhythm, later in Bamako. Nine years later I learned a nicer but more difficult basic pattern from Youssouf Keita. The song calls for the feast (Awa) to begin (Dabolé)! In the first part you will see what starts (Dabolé) and which instruments will play (Kambora). In the second part of the song the players are called with their instruments:

Here are some pictures of our trip to Mali and listen to my first acquaintance with this song in Kolina, Mali in 2007. We heard on the Hunting-festival where Oumou Mariko sang and Lamini Balani was the leading balafon player. Later in Bamako, we had some lessons from Lamini in Awa Dabolé and some other songs. In 2012 I have made a first attempt to start a Worldrecord playing on same-tuned balafons. Here you’ll find a videoclip. 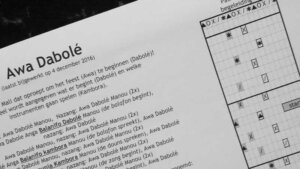